From Heraldry of the World
Your site history : Rauenberg (Rhein-Neckar Kreis)
Jump to navigation Jump to search 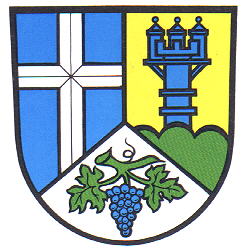 Previously Rauenberg used the arms below, which were adopted in 1901.

The cross symbolises again the State of Speyer, as Rauenberg belonged from 1677-1803 to Speyer. The oldest seal of the village, dating from 1715 also shows only the cross of Speyer.

The second seal of Rauenberg, dating from 1811 shows a bunch of grapes and a fork, with the letters R and B and two fleur-de-lys.

The seal symbolised the name and the importance of agriculture. The meaning of the fleur-de-lys is not clear. In the proposal of 1900 the cross and fleur-de-lys were combined.