From Heraldry of the World
Your site history : Ravensburg (kreis)
Jump to navigation Jump to search 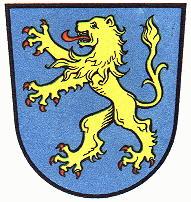 The lion is the lion of the Welfen dynasty who owned several estates near Altdorf and Ravensburg. They also founded the monastery in Weingarten and the town of Ravensburg. The arms thus represent the arms of one of the first rulers in the area and do not include parts of the arms of later rulers.