From Heraldry of the World
Your site history : Regensburg
Jump to navigation Jump to search 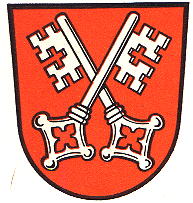 The arms show the crossed keys of St.Peter, the patron saint of the city.

When the keys were first used on the arms of the city is not clear; they are known since around 1300 as arms of the Counts of Regensburg and since 1320 as a symbol of the city. On seals they first appear in a small shield on a seal dating from the end of the 14th century. The main seal of the city, which dates from the end of the 12th century, shows St. Peter sitting on a throne, holding a key. Smaller seals from the 13th and 14th century show only the bust of St. Peter, wearing a tiara, or papal crown. All small seals since 1519 show only the arms with the crossed keys.

Similarly, the city uses since the middle of the 14th century only the keys as its symbol, either in or without a shield.