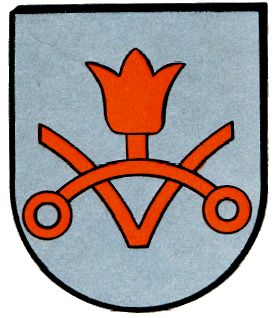 The arms show a symbolised tree of life. The village historically was quite poor, but the local people wanted to have some decorations which gave them hope, which was the tree of life. This simplified version could be found in many places in the village and was thus chosen as the arms of the village. The colours are those of the State of Minden, to which the area historically belonged.