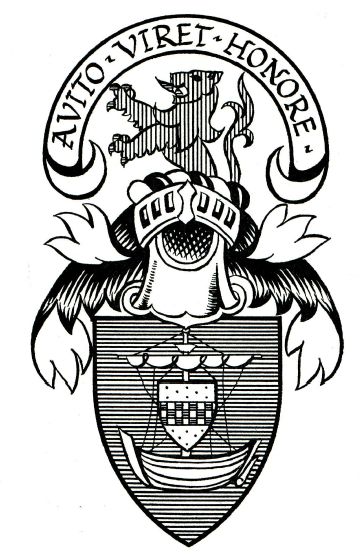 Azure, a lymphad sails furled Argent, on a shield Or pendant therefrom, a fess chequy of the First and Second. Above the Shield is placed an Esquire's Helmet with a Mantling Gules doubled Argent, and issuing out of a Wreath of the proper Liveries is set for Crest a demi-lion rampant Gules, armed and langued Azure, and in an Escrol over the same this Motto "Avito Viret Honore".

The blue/silver fess on the gold field and the ship combine the coat of the High Stewards of Scotland, whose first abode in Scotland was Renfrewshire, and thus the Royal House of Stewart, with the galley of the West of Scotland and of the Royal burgh of Renfrew.

The demi-lion was the crest of Robert Stewart before he ascended the throne as King Robert II. The Latin motto-"He flourishes through the honour of his ancestors", is one of those used by the Stewarts, and is still used by some of their descendants, including the Marquess of Bute.

The arms were originally granted to the Commissioners of Supply for Renfrewshire.