From Heraldry of the World
Your site history : Reutlingen (kreis)
Jump to navigation Jump to search 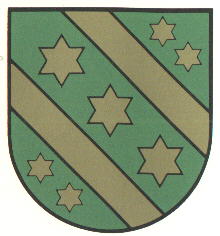 The largest part of the district was ruled in the early Middle Ages by the Counts of Achalm. The counts did not use arms, but in the 12th century the Zwiefalten Abbey appointed arms to the counts (who had founded the monastery). These arms were adopted by the district in 1980 as district arms.