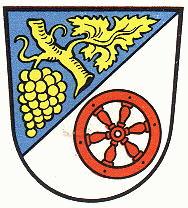 The arms are a combination of a vine grape, symbolising the importance of wine growing in the area, and the wheel of Mainz. A large part of the county was part of the State of Mainz, some parts already from the 9th century. The prince-bishops of Mainz ruled the area for many centuries and are thus of major historical importance to the area.