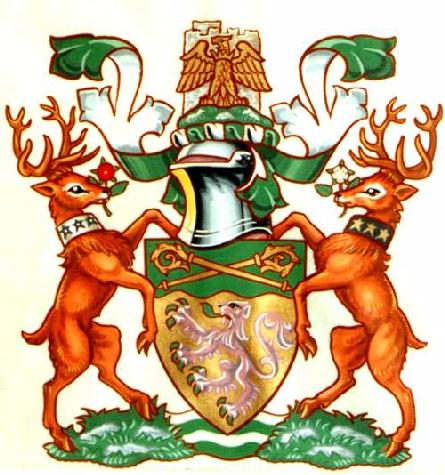 Arms : Or a Lion Purpure armed and langed Vert on a Chief wavy Vert two Crosiers in saltire Or.
Crest : On a Wreath Argent and Vert upon a Limestone Crag in front of a representation of Clitheroe Castle proper an Eagle displayed wings inverted gorged with a Roman Corona radiata Or.
Supporters : On either side a Hart Royal proper that on the dexter gorged with a Collar Argent charged with six pierced Mullets three being visible Sable and holding in the mouth a Rose Gules barbed seeded leaved and slipped proper that on the sinister gorged with a Collar Sable charged with six Mullets three being visible Or holding in the mouth a Rose Argent barbed seeded leaved and slipped proper all upon a Compartment of Grass with Limestone Outcrops proper divided by Water barry wavy of four Argent and Vert.

The shield gives a picture of the broad historical and topographical Identity of the whole area. The green Chief with wavy edge represents the Ribble Valley; below it in the purple lion on gold of the de Lacys, mediaeval Lords of Blackburnshire and the Honour of Clitheroe. The lion is seen in the arms of Clitheroe Borough, Blackburn and Burnley Rural Districts, and the de Lacy colours of purple and gold in those of Clitheroe Rural District and Longridge Urban District. On the chief are two gold crosiers from the arms of Whalley Abbey and Sawley Abbey, Indicating the Important part they played in the social and economic life of the west and east of the area.

The crest shows Clitheroe Castle standing upon its limestone crag, the centre of local government In the Ribble Valley. In front of the castle stands the golden eagle of Rome, from the arms of Preston Rural District, symbolising the important monument at Ribchester. For dinstinction from other eagle crests, this eagle's neck is encircled by a Roman corona radiata.

The supporters commemorate famous families on the Lancashire and Yorkshire sides of the District. They are stags, here both shown in their natural colours for aesthetic reasons. That on the left derives from the gold stag supporter of the Stanley Earls of Derby; he has a white collar charged with three pierced mullets, or spur rowels, in black - the famous arms of the Asshetons. In his mouth is a single Red Rose of Lancaster. On the right, recalling the stags in the arms of the Parkers of Browsholme and the Lister Barons Ribblesdale, whose three gold mullets on black provide the collar. In his mouth is a single white Rose of York. The supporters stand on a special base of grass with outcrops of limestone, divided by conventional heraldic waves, representing the Ribble Valley.