From Heraldry of the World
Your site history : Richmond (London borough)
Jump to navigation Jump to search

Incorporated into : 1965 Richmond upon Thames 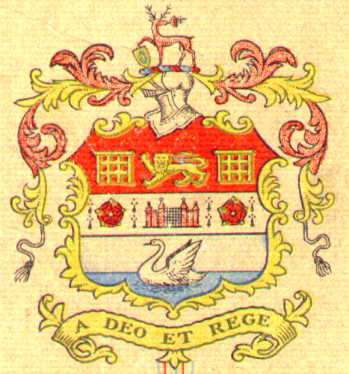 Arms : Per fess Gules and Azure on a Fess Ermine between in chief a Lion passant guardant between two Portcullises chained Or and in base a Swan Argent upon Water proper a representation of the Ancient Palace of Richmond proper between two Roses Gules barbed and seeded proper.
Crest : On a Wreath Argent and Gules upon a Mount a Stag reguardant proper holding in its mouth two Roses on one Stem one Argent the other Gules barbed and seeded proper and supporting with the dexter fore-hoof an Escutcheon Or charged with a Wreath of Oak Vert.
Motto: 'A DEO ET REGE' - From God and the King

The roses, portcullises, and lion allude to Richmond's royal associations. In particular to Henry VII, who rebuilt the palace, represented in the centre of the shield, and from whose Earldom of Richmond, in Yorkshire, the town (formerly Sheen) derived its name in 1500. The swan represents the River Thames.

The stag denotes the Old Deer Park and Richmond Park, and the Tudor roses are a further refernce to this period, while the idea of municipality is represented by the wreath on the shield.

The motto seeks to convey to the mind that "God made the country in its beauty, and the King (George III) gave to the town the Hill, etc".