From Heraldry of the World
Your site history : Riedenburg (kreis)
Jump to navigation Jump to search 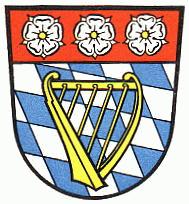 The upper part shows the roses taken from the arms of the Counts of Riedenburg. The harp is a symbol for one of the medieval counts who was famous for his music. The background of the lower part of the shield is the arms of the Wittelsbach family, Kings of Bayern, and symbolises the ties to Bayern.