From Heraldry of the World
Your site history : Roches
Jump to navigation Jump to search 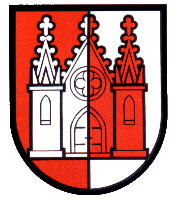 The arms are based on the arms of the district of Moutier, to which the village belongs. The change of colours represent the historical division of the territory of Basel in a catholic and protestant part. The division line ran through the village of Roches. The arms were divised and adopted in 1944.