From Heraldry of the World
Your site history : Rochford
Jump to navigation Jump to search 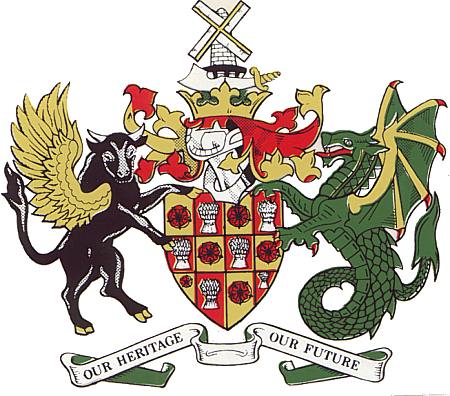 Arms : Chequy of twelve Or a Rose Gules barbed and seeded proper charged with a like Rose Argent barbed and seeded proper and Gules a Garb Or.
Crest : Issuant from an Ancient Crown Or a Mount Vert thereon in front of a representation of Rayleigh Windmill proper a Seax fesswise proper mantled Gules doubled Or.
Supporters : On the dexter side a Bull [guardant] Sable armed unguled and winged Or and sinister a Wyvern Vert.
Motto: 'OUR HERITAGE OUR FUTURE'

The arms were officially granted on March 8, 1975.

The shield shows wheat sheaves - for Agriculture and Roses - connection with Royalty (Tudors). The colours of red and gold also suggest royalty. The field is divided into 12 for the 12 original Parishes of Rochford district.

The crest shows a seax or sword for Essex County and a windmill from the arms of Rayleigh.

The supporters are a bull and a wyvern. The bull sugests cattle farming, and also was part of the coat of arms of the Boleyn family who had strong connections with Rochford. It is winged to show a connection with Southend Airport. The wyvern is the ancient emblem of Sweyne showing a Viking connection.

The motto - Our Heritage, Our Future - was designed by Mrs Littlewood of Prittlewell in a competition.