From Heraldry of the World
Your site history : Rockenberg
Jump to navigation Jump to search 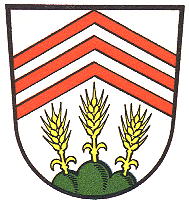 The arms were granted in 1960, and are based on the oldest known seal, dating from the early 16th century. The arms show in the upper half the chevrons of the Lords of Eppstein-Königstein, who ruled the area from 1418-1535. The silver and red are also the main colours of the State of Mainz, to which the area belonged from 1581-1802. The lower part is a canting, rye on a hill (Rockenberg = rye-mountain).