From Heraldry of the World
Your site history : Rockenhausen
Jump to navigation Jump to search 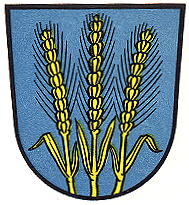 The village got city rights in 1332 by the Counts of Rau, who also gave the city its name. The oldest seal of the city dates from 1335 and shows the arms of the counts, surrounded by ears of rye. The rye is a canting symbol (Rogge). In the 15th century the seals showed a divided shield with in each field a single ear. In 1600 the ears were planted on a piece of grass. The present arms were granted in 1844 and a third ear was added. It is likely that the old worn seal was not quite clear, and that the partition line was seen as the third ear.