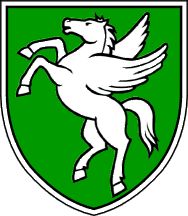 The arms of Rogaška Slatina have a compicated history. The present arms show a silver Pegasus in a green field. The Pegasus was chosen based on an ancient Greek legend in which Apollo called upon Pegasus to hit with its hoof on the ground to strike open a well Gippocrene. This legend was shown in a 17th century copper plate engraving promoting the healing powers of the mineral water of the Rogaška well.

Previously the town used completely different arms, designed in the 1980s and adopted on October 25, 1995.
These arms show golden bubbles of mineral water in a green field, the fame of Rogaška Slatina: 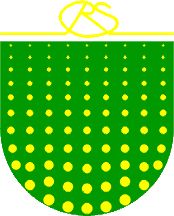 Historically the town of Rohitsch, now Rogaška, was granted arms on February 6, 1535 by Emperor Ferdinand I.

These arms were described as a red field with a silver tower, made of square bricks, with red roof. These arms were shown by Kobel in 1954. In the middle of the 19th century, however, Widimsky showed again different arms, namely three silver towers in a blue field, with two golden stars.