From Heraldry of the World
Your site history : Rossendale
Jump to navigation Jump to search 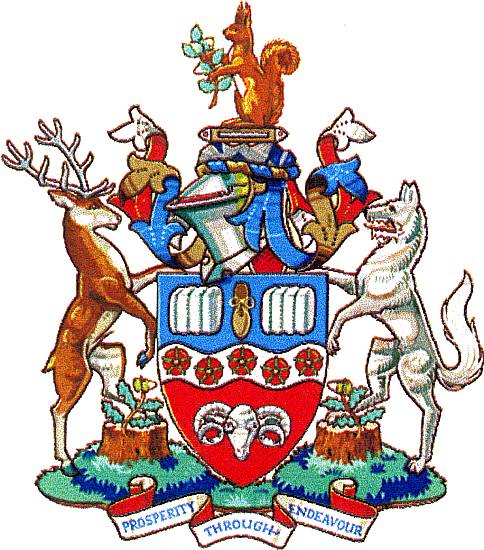 Arms : Party per fess Azure and Gules on a Fess wavy Argent between in chief a Shoe toe cap downwards the lace tied all Or enclosed by two Bales of Cotton proper and in base a Ram's Head caboshed Argent five Roses Gules barbed and seeded proper.
Crest : On a Wreath Or and Azure a Rocky Mount proper thereon a Shuttle Or furnished Argent and sejant thereupon a Squirrel proper holding between the forelegs a Hazel Branch also proper, Mantled Gules and Azure doubled Argent and Or.
Supporters : On a compartment of Moorland with a Shallow Valley in the midst proper on the dexter a Stag and on the sinister a Wolf each reposing the interior foot upon a Tree Stump growing therefrom an Oak Branch fructed all proper.
Motto: 'PROSPERITY THROUGH ENDEAVOUR'

The arms were officially granted on November 28, 1975.

The blue and red colours of the shield come from the arms of the merged towns. Across the centre is a silver wave for the River Irwell which flows through the centre of the Rossendale Valley. On the wave are five red roses to show that the Borough was created from five Lancashire councils. About the central are placed emblems of local industries - a shoe (leatherworking), bales of cotton and a rams head (for the textile industries).

The crest has a rocky mount to show the area's many hills. The squirrel was found in the arms of both Bacup and Rawtenstall. He holds a branch of hazel from Haslingden's shield. The squirel is sitting on a shuttle, familiar charge in the arms of weaving districts. The mantling is red and blue doubled gold and silver thus preseving the livery of all the merged boroughs.

The supporters and compartment represent the ancient Rossendale Forest. on the dexter is a stag, on the sinister a wolf, both with their interior foot on a tree stump. The compartment is described in the official blazon as "of moorland with a shallow valley in the midst".