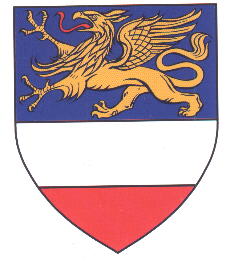 The arms combine the griffin of the Princes of Rostock with the arms of the Hanseatic League of cities. The griffin first appears on the second known seal of the city, which is known since 1367. The first seal showed a bull's head with a sun and a crescent. The third seal also shows only the griffin(below). The bull's head is the arms of Mecklenburg and the princes of Rostock were a branch of the Dukes of Mecklenburg.