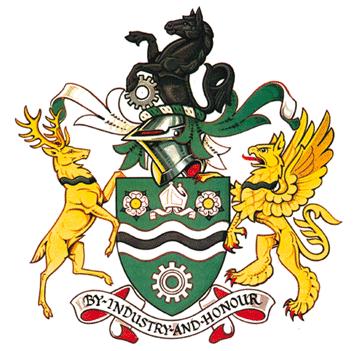 Arms : Vert on a Fess wavy between in chief a Mitre between two Roses Argent barbed and seeded proper and in base a Cogwheel Argent a Bar wavy Sable.
Crest : On a Wreath of the Colours a demi-Horse Sable resting its dexter hoof upon a Cogwheel proper.
Supporters : On the dexter a Buck and on the sinister a Griffin Or each charged upon the neck with a Bar wavy Sable.
Motto: 'BY INDUSTRY AND HONOUR'

The arms were officially granted on February 7, 1983.

The two white roses symbolise York. The Archiepiscopal Mitre is for Thomas Rotherham, Archbishop of York 1480-1500, a native of Rotherham, founder of our lost College of Jesus of Rotherham and benefactor to the church. The wavy bar alludes to the River Rother, and upon it is charged a wavy bar to refer to coal. The cogwheel is a general allusion to industry. The crest is a demi Shire Horse supporting a cogwheel. 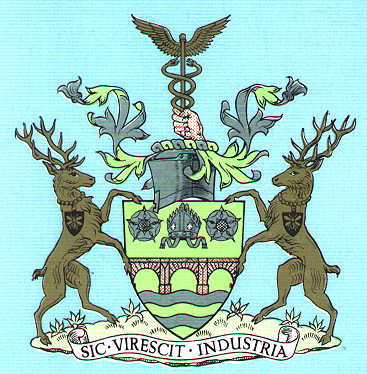 Arms : Vert above two Bars wavy in base Argent a Bridge of three arches throughout proper in chief a Mitre between two Roses of the second.
Crest : On a Wreath of the Colours a Hand proper grasping a Caduceus erect Or.
Supporters : On either side a Stag Or gorged with a Chain pendent therefrom an Escutcheon Sable charged with a Bee volant Gold.
Motto: 'SIC VIRESCIT INDUSTRIA' - Thus industry flourishes

The green background, the silver mitre, and the gold stags, are derived from the arms and insignia of Thomas of Rotherham (1423-1500), Archbishop of York, who founded Jesus College, Rotherham and built part of the Church of All Saints. The bridge, like that on the unofficial device used before the arms were granted, represents the ancient bridge at Rotherham. It also refers to the Old Southwark Bridge, built by Rotherham iromasters, and the Bailey bridge, invented by a Rotherham man. The two silver wavy bars are for the rivers Rother and Don, at the junction of which the town is situated, and the white roses indicate the county. The man's hand, naturally coloured, holding Mercury's golden staff represents commerce.

The golden bees typify an industrial town and the black chains around the stags' necks have reference to the town's chief industries of iron and brass founding. The black colour of the small shields is an allusion to the fact that Rotherham is the centre of a coal-mining district.

The motto was in earlier use by the Borough.