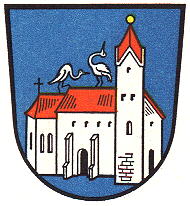 The arms were officially granted on January 4, 1973.

Rotthalmünster is one of the oldest towns (Markt) in Germany, its charter dating from 1280. The oldest seal of the town probably dates from around 1350, when the charter was confirmed by King Ludwig of Bayern. The seal is known from 1374 and shows the canting church (Münster). The church is shown in a shield first in the 16th century. The storks on the church are already seen on the oldest seal and are probably chosen as they are a common bird in the Rottal area. The arms have thus basically not changed since the 16th century, although in the last century the church was sometimes shown with two towers.