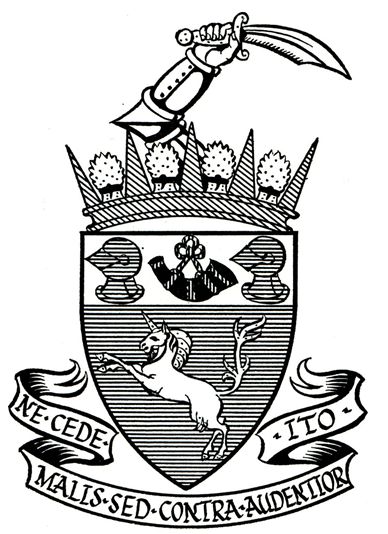 Azure, a unicorn saliant Argent, horned, maned, and unguled Or, the tail tufted of the Last; on a chief of the Second a hunting horn Sable, stringed and viroled Gules, between two esquires' helmets of the field.

With Crest a dexter arm from the shoulder arm­ braced and brandishing a scimitar aloft Proper, the last hilted and pommelled Or, with Motto in an Escrol below the Shield "Ne Cede Malis Sed Contra Audentior Ito", which arms are ensigned with a coronet suitable to a County, videlicet: Issuant from a circlet Vert, eight paling piles also Vert alternately with as many garbs Or, banded Sable.

Very little appears to have been recorded about them, though they seem to have had associations with local Defence Forces, as an example of them appears on a fragment of an 1804 Colour of the Kelso Volunteers which is preserved in Kelso Old Parish Church.

The unicorn appears in the arms of Kerr, Duke of Roxburghe, and Kerr, Marquess of Lothian, and seems to have been a symbol long associated with the County. About 1650, it was adopted by the Royal Burgh of Jedburgh as the device on its seal, but in 1680 Lord Lyon Erskine would not allow the Burgh to have arms containing it, as it seems that he regarded the use of a Royal supporter, without special authority from the Crown, to be improper. It is possible, however, that the unicorn may have appeared in some badge or seal connected with the Sheriffdom and may have been granted to the County to mark a special Royal connection.

The helmets and the hunting-horn almost certainly represent the famous Border riders, one of whom appears in the arms of Jedburgh.

The crest is very like that of the old Earls of Marchmont, who had a naked arm brandishing a scimitar, and to that of Eliott of Stobs who use a mailed arm brandishing a cutlass. Both these families are closely associated with the history of Roxburghshire.

The Latin motto-"Yield not to evil things but rather go on more boldly"-is a quotation from Virgil, Aeneid, vi, 95.

In 1890, the Lyon Office offered to add a helmet and mantling, but this was not taken up by the County Council. When an Extract of Matriculation was issued on 8 May 1962, only a County Council coronet was added.