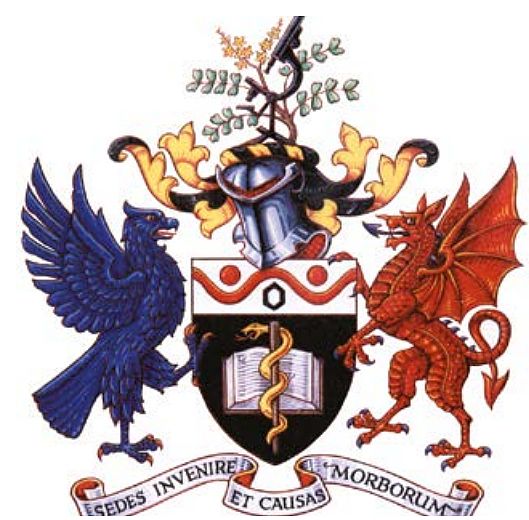 Arms : . Sable, surmounting an open book a rod of Aesculapius proper, the serpent Or; on a chief argent a bar wavy gules between in chief two torteaux and in base a benzene ring sable.
Crest: On a wreath of the colours, In front of a sprig of logwood leaved and fructed proper, an antique microscope proper.
Motto: Sedes invenire et causas morborum

The shield bears reference to the medical and educative roles of the College. In the centre there is an open book, the Aesculapian staff and serpent. The chief depicts the (then) four main pathology disciplines using heraldic symbols: the red wavy line represents an eosinophilic collagen fibril – histopathology; the red circles above the wavy line represent a red blood cell – haematology – and gram-negative coccus – microbiology, while the shape beneath the wavy line represents a benzene ring – chemical pathology.

In Greek mythology the Rod of Asclepius is a serpent-entwined rod wielded by the Greek god Asclepius, a deity associated with healing and medicine. The symbol has continued to be used in modern times, where it is associated with medicine and healthcare,

In 1970 the College was granted its Royal Charter and the coat of arms was altered to incorporate supporters. The left-hand supporter is a blue eagle with its wings expanded, representing enlightenment and learning. The right-hand supporter is a red dragon with its wings expanded, representing evil, disease and death. The pair represents the fight between knowledge and the prevalence of disease.

The College’s Latin motto is Sedes invenire et causas morborum – ‘to seek the sites and causes of disease’. Pathology: the science behind the cure.