Incorporated into : 1980 Royal Society of Chemistry 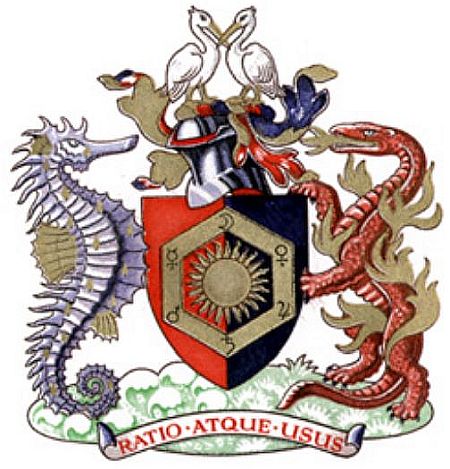 Arms : Per pale gules and azure, within a voided hexagon Or charged with the alchemical symbols for silver, copper, tin, lead, iron and mercury, sable a sun in splendour gold.
Crest: On the dexter side a sea-horse (Hippocampus) azure, guttee d'Or finned gold, and on the sinister side a salamander gules in flames Or.
Motto: Ratio atque usus

The arms were officially granted on September 12, 1958.

An historical approach was adopted by designing these arms. The initial step was to recall the first evidence of anything approaching scientific thinking among prehistoric peoples. It was decided that such evidence was to be found in 'The doctrine of opposites' (or 'The two contraries') which prevailed in various forms among the ancient civilisations of China and the Middle East and simply distinguished between two contrasting characteristics such as light and dark, hot and cold, wet and dry. Two contrasting heraldic colours, red (gules) and blue (azure), were therefore selected for the background of the shield.

Moving forward a few centuries, the Babylonian correlation of the terrestrial and celestial bodies led to the choice of the symbols of the sun and planets, which also happened to represent the seven metals of the alchemists. Moreover, the sun was an almost inevitable choice as the central feature of the shield, because of its continuous generation of energy and elements. The hexagon, denoting the benzene ring (on which the planetary symbols were superimposed) was introduced to signify the evolution of modern chemistry.

The supporters and crest were also selected by reference to ancient sources. The Greek theory of the four elements — earth, air, fire and water — was indicated by the mythical salamander, that was believed to live in fire, standing on earth, and by the hippocampus in its element, water, together with two pelicans on the crest to suggest the fourth element, air. These birds were preferred to others because they also represented the distillation vessel much used by the alchemists and known as the double pelican.

The motto Ratio atque usus was intended to point to the two aspects of the profession of chemistry — theory and practice, principles and application, knowledge and experience, science and art — and militant scholars still quarrel about the best translation. Julius Caesar, who should have understood the true meaning, used the phrase in his book on the Gallic War, to indicate (military) theory and its practical application.

An earlier proposal showed a retort as the main charge and crest and the chemists Boyle and Priestley as supporters. This idea was never proposed to the College of Arms. 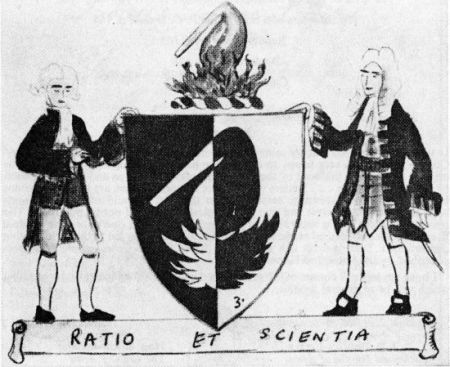