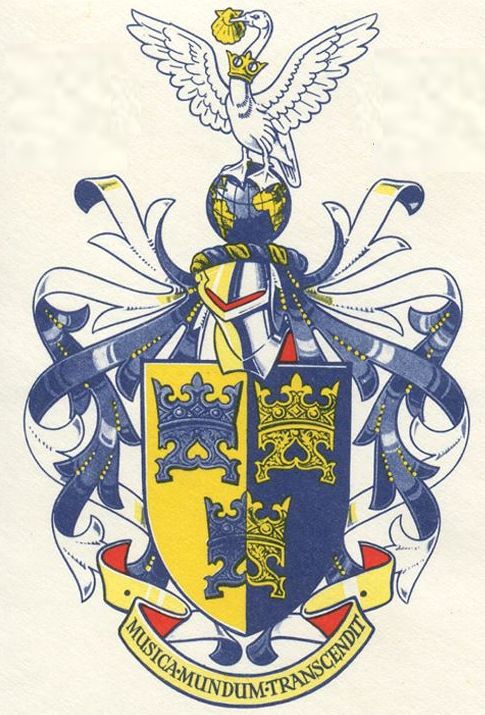 The arms show a very original charge, a violin bridge of a Stradivarius violin. It is symbolic of the music of which it is instrumental, it is also symbolic of the bridge between peoples and nations which the common cultural factor of music can build.

The Royal and musical elements in the charges are backed by a field of the Orchestra's livery colours, blue and gold: highly appropriate, the colours of the air being the ethereal blue, gold and white.

The globe is symbolic of the Orchestra's international renown: the posture of the swan implies activity and a forward-looking attitude. The early days of the R.P.O. are synonymous in most music-lovers' minds with the heyday of Sir Thomas Beecham, whose father was granted arms with, for crest, the neck of a swan and an escallop. As if to signify the Orchestra's complete development, here is the whole bird with wings displayed.

The motto "Musica Mundum Transcendit" may be loosely translated as "Music bridges the world". In addition to echoing the meaning of the violin bridge, the motto describes the charges (bridges) and the crest (the world).