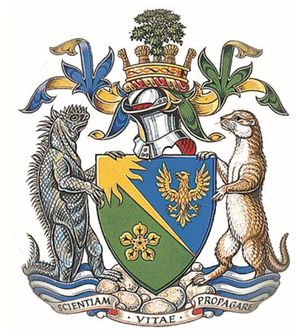 Arms: Per bend Azure and Vert in sinister chief an Eagle displayed Or beaked and legged Gules and in dexter base a Cinquefoil also Or pierced and charged with five Ermine spots radiating outward Sable a Sun in splendour issuant in dexter canton with one straight ray extending to sinister base Gold.
Crest: upon a helm with a wreath Or and Gules an Elm tree proper issuant from a coronet its finials in the form of Garbs and the rim embellished palewise with a Double Helix Gules and Sable. Mantled: Dexter - Azure doubled Or, Sinister - Vert doubled Or.
Supporters: Dexter - a Galapagos Marine Iguana, Sinister - an Otter.
Compartment: An island of pebbles all proper amid Water barry wavy Azure and Argent.
Motto: "Scientiam Vitae propa¬gere".

The arms were officially granted in 1992 to the Institute of Biology.

Energy radiating from the sun is intercepted by chlorophyll and enables aerial gases and water to be combined and converted into large molecules under instructions coded in nucleic acids. Food chains of organisms transfer and convert these large molecules into a diverse array of life forms currently frequently classified in five kingdoms: the animals, plants, fungi, protists and pro¬caryotes.

The arms thus show a sum and in the shield a flower and a bird. The supporters are a reptile and a mammal; representing the different forms of life.

The crest has a different meaning; both "Life" and "Knowledge" have anciently been symbolised by a tree. With the object of promoting the study of life, the Institute was established in England where the native Elm (Ulmus procera Salisb.) has reached a point of near-extinction because of inadvertent neglect of the principles of conservation and where timber from the species has been used to make coffins. Mortality is a matter of biological concern.

Literature : Information from the institute by mail.