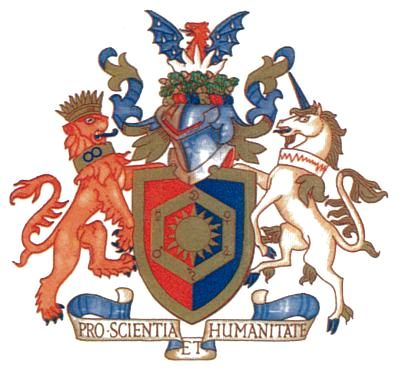 Arms: Per Pale Gules and Azure within a voided Hexagon Or charged with the Alchemical Symbols for Silver, Copper, Tin, Lead, Iron and Mercury Sable a Sun in splendour and all within a bordure Gold.
Crest: Upon a Helm with a Wreath Or Gules and Azure rising within a Chaplet of Oak Leaves fructed Gules from Flames Argent a Phoenix Gules having dragon's wings displayed Sable gutty Argent. Mantling: Azure doubled Or.<br Supporters: dexter a Lion Gules crowned with a Crown Rayonny and gorged with a Collar Or thereon two pairs of Octagons (one manifest) each Octagon voided and conjoined Gules, sinister a Unicorn Argent armed langued and unguled Azure crined and tufted Or about the neck a Scroll of Graph Paper bearing a Trace Gules.
Motto: PRO SCIENTIA ET HUMANITATE.

The Shield is derived from the arms of the Royal Institute of Chemistry with the addition of a gold bordure. The sun, as the generator of energy, is surrounded by the planetary symbols in the Babylonian correlation. Together, they also represent the seven metals known to the early alchemists. The symbols are superimposed on a hexagon, denoting the benzene ring and thus the evolution of modern chemistry. The contrasting tinctures of the field allude to the "doctrine of opposites" - a proposition developed in the ancient world that simply distinguished between two characteristics (e.g. hot and cold) and can be regarded as the first approach to scientific thinking of which there is written evidence.

The unusual phoenix in the crest is an appropriate device for the RSC which is the re-embodiment of the four societies that it has succeeded. Moreover, the avian phoenix with water dropping from its outstretched wings, together with the flames and chaplet of oak recall the Greek concept of the four elements - air, water, fire and earth.

The lion and unicorn supporters are well suited to a "Royal" society of which HM The Queen is Patron. The lion's collar carries a symbol based on the Chemical Society's monogram while the unicorn bears a stylised graph and formed part of the arms originally granted to the Society for Analytical Chemistry.

The motto epitomises the main functions of a learned society and a representative body in the scientific field: "For the sake of knowledge and for the benefit of mankind."