The arms show a red chevron, taken from the arms of the Counts of Ravensberg. The tobacco leaves symbolise that the the time the tobacco industry was of great importance to the village. The base shows a watermill wheel, symbolising the former watermills in the village. The colours are those of the State of Minden, to which the area historically belonged.

The previous arms were granted on February 9, 1939. 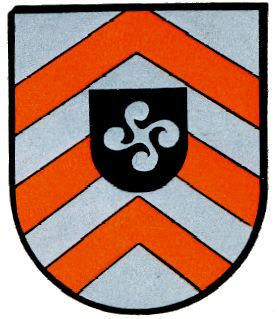 The arms show again the Ravensberg arms, and on the escutcheon a Keulenwinkelkreuz, a solar-symbol and used ofen on farmhouses in the region, but due to its similarity with the swastika it was removed in 1950.