From Heraldry of the World
Your site history : Saarpfalz Kreis
Jump to navigation Jump to search 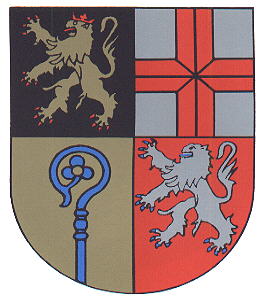 The arms combine symbols for the most influential historical rulers in the district. The first quarter shows the lion of the Pfalz, the second the cross of the State of Trier. The third quarter shows a crosier for the many (smaller) possessions of a number of monasteries in the district. The silver lion is the lion of the Counts and county of Homburg, which was incorporated into the county of Saarbrücken in 1449.