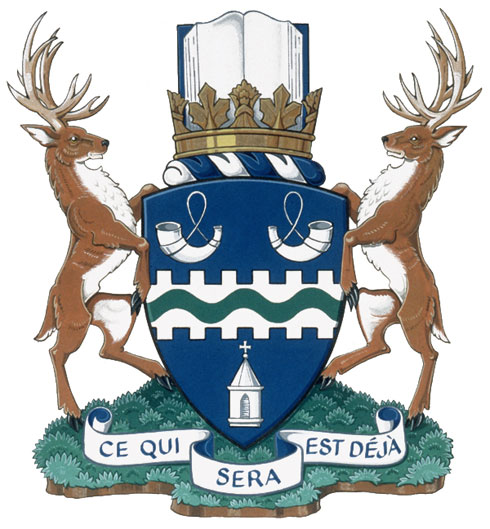 Arms : Azure on a fess bretessed between in chief two hunting horns and in base a church steeple Argent, a bar wavy Vert.
Crest: Issuant from a circle the upper rim set alternately with garbs and maple leaves Or, an open book Argent bound Azure.
Supporters: Two stags on a grassy mound proper.
Motto: CE QUI SERA EST DÉJÀ

The blue, white and green colours are those of the logo used by the municipality. These colours, when combined, give the arms a modern look. The crenellated band symbolises the railway constructed by the Grand Trunk and which promoted economic development and communication. It also underscores the status of Saint-Charles-de-Bellechasse as a hub for the provision and export of goods in the region over many years. The wavy band refers to the particular geographic site of the municipality and to the Boyer River, which spans its entire length from east to west. The combination of the two bands therefore represents the two major original means of communication. The hunting horns allude to the name Bellechasse (literally “good hunt”). Moreover, the horns are stylized heraldic figures associated with the world of regulated aristocratic hunting since the Middle Ages. The steeple recognizes the role of the curés as the main agents behind the development of Saint-Charles-de-Bellechasse in social, religious and educational fields for more than 200 years. The steeple also recalls the parish's patron saint, St. Charles Borromeo, Cardinal of Milan.

The book attests to the fact that public schools have existed in Saint-Charles-de-Bellechasse for 250 years. The coronet of wheat sheaves and maple leaves indicates that the basic means of development and subsistence of the town has been agriculture. It further refers to the flourmills and sawmills that are part of the past and present history of the town. The maple leaves underline the importance of the forestry and the maple syrup industries.

The stags are a reference to the arms of Seigneur Charles Couillard de Beaumont, after whom the town was named.

The motto CE QUI SERA EST DÉJÀ means “What will be is here now”, this phrase was chosen by the town's arms committee. Follow us :