From Heraldry of the World
Your site history : Special:Search > Saint-Martin (Quebec)
Jump to navigation Jump to search 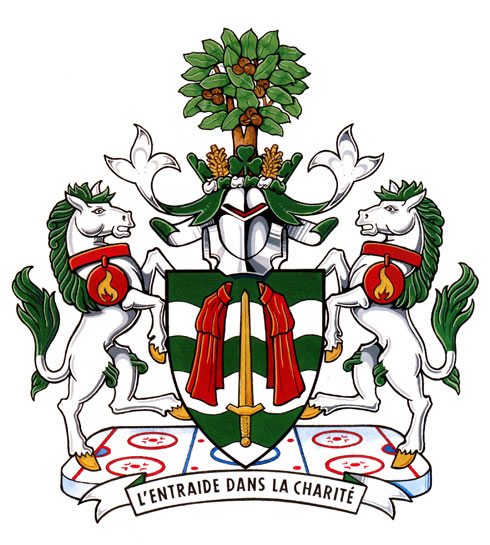 Arms : Barry-wavy Vert and Argent a sword Or between two halves of a cape Gules.
Crest: Issuant from a circlet of shamrocks Vert and pine cones Or a rubber tree fructed prope.
Supporters: Two horses Argent crined and queued Vert unguled Or, each gorged of a collar pendent therefrom a torteau charged with a flame Or and standing on a hockey rink proper.
Motto: L’ENTRAIDE DANS LA CHARITÉ

The wavy bands represent Saint-Martin’s geographic location at the confluence of the Chaudière and Grande Coudée rivers. The sword and cloak are attributes of St. Martin of Tours, after whom the municipality is named. Legend has it that on a cold winter’s day, St. Martin drew his sword, cut his cloak in two and gave one piece to a poor man.

The hevea, or rubber tree, is cultivated for its latex, which is used to make rubber. Here, it represents the municipality’s industries, primarily its processing plants, including acrylic and wood. The shamrocks and pine cones allude to Saint-Martin’s early settlers, namely the Irish and the inhabitants of Notre-Dame-des-Pins, a neighbouring municipality.

The horses refer to St. Martin of Tours who, according to legend, was on horseback when he cut his cloak. The fire on their collars represents the flame of knowledge and, by extension, the municipality’s educational mission through its schools and library. The rink symbolizes a meeting place for the citizens of Saint-Martin and in particular hockey, a sport long practised and highly popular in the region.

The motto “Mutual assistance in charity,” refers to St. Martin of Tours and to the municipality’s volunteers, who work tirelessly for the benefit of the community.