From Heraldry of the World
Your site history : Saint Albans
Jump to navigation Jump to search 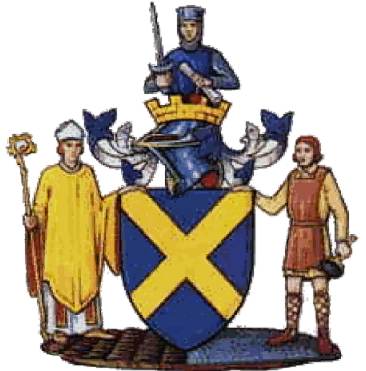 Arms : Azure a Saltire Or.
Crest : Issuant from a Mural Crown Or a demi Figure of a Knight armed of the period circa 1215 holding in the dexter hand a Sword erect and in the sinister hand a Roll of Parchment proper.
Supporters : On the dexter side an Abbot in Liturgical Vestments and Plain Mitre and supporting with the exterior hand a Crozier on the sinister side a Figure representing John the Printer and holding in the exterior hand an Ink-ball, the whole upon a Compartment per pale of a Ploughed Field and Cobbles all proper.

The arms (shield only) were recorded in 1634 and certified (but not grnated) in 1951, the complete arms as shown above were granted in 1974.

The golden saltire is the attributed arms of the Kingdom of Mercia. King Offa of Mercia founded St. Albans abbey on the site of his martyrdom. Tradition has it that from that date the Mercian arms were granted to the town.

In 1974 the supporters and crest were added. The crest has the figure of a baron holding the Magna Carta, which has associations with St. Albans.