From Heraldry of the World
Your site history : Saintes (Tubize)
Jump to navigation Jump to search 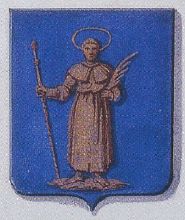 The arms show St. Remaclus. The meaning or origin of these arms is not known. They were granted in 1819 by the Dutch government in the Dutch national colours of blue and gold. After the Belgian independence the municipal council had a long meeting on the arms. Even though they had no idea of the origin or the meaning, they also had no alternative. The arms were thus again granted in 1838.