From Heraldry of the World
Your site history : Salzgitter
Jump to navigation Jump to search 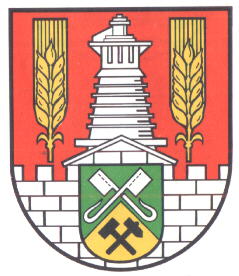 The arms show a city wall, to characterise the city character of Salzgitter. The two wheat-ears and the blast furnace symbolise the agriculture and industry respectively. The small shield shows in the lower half some miner's tools, symbol for the important mining in the area. The upper half shows two salt hooks (see below).

The history of the arms of Salzgitter is rather complicated.

In the early 19th century the city used the old arms of Salzliebenhalle, one of the predecessors of Salzgitter city. These arms showed a pyramid with a man's head and in the lower half two crossed salt-hooks.

In 1936 the council wanted to readopt the old arms. However, the National-Socialist Regime did not agree with the man's head and pyramid. In 1936 new arms were granted showing the salt-hooks, properly drawn, and a plain red upper half.

In 1942 Salzgitter was enlarged with 28 other municipalities and received the name Watenstedt-Salzgitter. The new municipality did not apply for new arms until 1946. After a competition a very complicated design was granted. The new arms showed two city walls, the one in front with a gate, between the walls a furnace flanked by on the one side the medieval symbol for salt, from which rose three wheatears, and on the other side two crossed miner's tools and the medieval symbol for iron. In the base of the shied were two blue bars. The arms thus showed the fact that Salzgitter was a city, with iron and salt mining and manufacturing the main sources of income, but with some agricultural element (wheatears) as well. The two bars represent the local channel.

As the above arms were not officially granted, and as the State Archives and the (then British) government did not approve of the design, new arms were made. After another contest and many different designs, the present arms, as shown above, were designed. At the same time the name Salzgitter was restored.