From Heraldry of the World
Your site history : Samtgemeinde Heemsen
Jump to navigation Jump to search 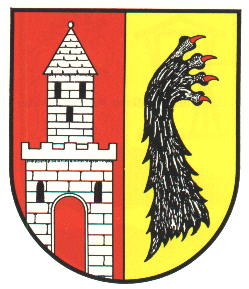 The arms are based on the oldest seal of the city of Drakenburg, known from the early 17th century. The seal showed the local Drakenburg castle, and a bear's claw taken from the arms of the Counts of Hoya, who ruled the area at the time. Later seals of Drakenburg do not longer show the claw, as after the 30-years war the counts played no role in the area anymore.