From Heraldry of the World
Your site history : Sankt Andreasberg
Jump to navigation Jump to search 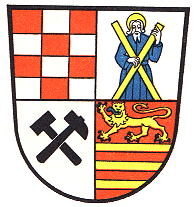 The arms were already used in the 19th century, but were never officially granted. In 1938 the arms were officially granted, but the then German regime did not approve of religious symbols, and the canting St. Andreas was replaced by a pine tree to symbolise the local forests. After the war the city returned to the original arms, but the description of 1948 was not clear in whether the saint was placed behind or in front of the cross. This was corrected in 1951.