From Heraldry of the World
Your site history : Sankt Georgen im Schwarzwald
Jump to navigation Jump to search 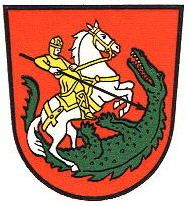 The arms are canting, showing St. George killing the dragon. The village developed around the St. George Abbey and received town rights in 1500. In 1891 St. Georgen received city rights.

The oldest seal of the town dates from the early 19th century and show the arms of Baden, with in the lower half the composition of saint and dragon. The saint is shown as a walking knight, holding a shield with a cross. After the granting of the city rights the bend of Baden was removed and the present arms were devised. The arms were officially granted on August 15, 1958 and were continued after the mergers in the 1970s.

The seals of the city: