From Heraldry of the World
Your site history : Sankt Leonhard im Pitztal
Jump to navigation Jump to search 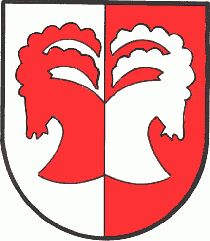 The arms show two ibex heads. These refer to the formely abundant ibex in the municipality, which, due to hunting, became extinct, and were reintroduced in 1953. The colours are the Austrian colours and refer to the royal hunting on ibex as mentioned in the hunting log of King Maximilian in 1500.