From Heraldry of the World
Your site history : Sankt Sebastian (Steiermark)
Jump to navigation Jump to search 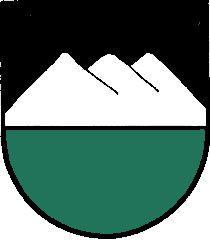 No explanation is given for the design of the arms. The arms employ the Styrian colours, green and white, and possibly represent the mountains of the region. The municipality lies near Mariazell at the border between the Austrian states of Styria and Lower Austria, in the Chalk Alps range. These mountains are dry and rocky, due to lack of water; the high meadows (Almen) and the valleys are green and fertile, however.