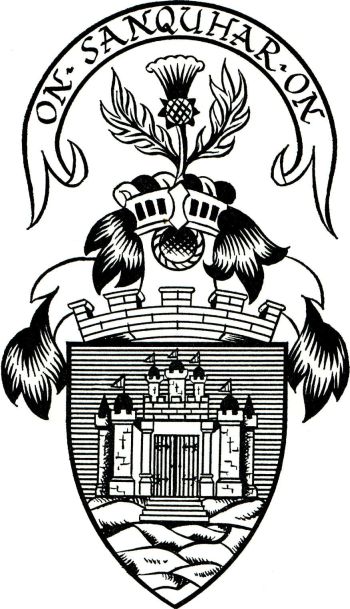 Azure, on a rock in base Proper, a double-leaved gate Gules, triple-towered, on an ascent of five steps flanked by two towers all Argent, towers arch-roofed and masoned Sable, vanes of the Second.

Above the Shield is placed a coronet suitable to a Royal Burgh and thereon a Helmet befitting their degree with a Mantling Azure doubled Argent, and on a Wreath of their Liveries is set for Crest a thistle slipped Proper, and in an Escrol over the same this Motto "On Sanquhar On".

The arms were officially granted on November 11, 1929.

Sanquhar was probably a Burgh of Barony dependent on the Crichton family by 1335.

The arms are based on an old Burgh seal, known since 1731.

Using the colours of Scotland and Crichton, they show the old Castle of Sanquhar, the Crichton Peel, first the seat of the Rosses and then of the Crichtons of Sanquhar. The five steps leading up to the gate recall the Five Incorporated Trades of Sanquhar (Hammermen, Squaremen, Weavers, Shoemakers and Tailors) and that it was only through the Five Trades that one could secure trading privileges in the Burgh.

The thistle in the crest has a special association with the town. It encircled the Castle on the flag of the Five Incorporated Trades of Sanquhar which is dated 1819, and among the poems and songs of James Kennedy (Dumfries, 1823) is one called "The Auld Castle and Thistle of Sanquhar".

The war-cry of the Crichtons was "On Crichton On" which was changed to "On Sanquhar On".

The current Royal Burgh of Sanquhar and District Community Council has not (yet) recorded arms.