From Heraldry of the World
Your site history : Sawbridgeworth
Jump to navigation Jump to search 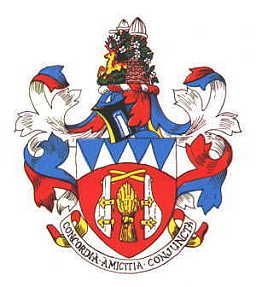 Arms : Gules a Garb Or between two Barge Rudders addorsed Argent furnished Gold the dexter tiller superimposing the sinister a Chief enarched per fesse indented throughout Azure and Argent.
Crest : On a Wreath Argent and Gules on a Mount Vert between two Oast Houses each garlanded with Apple Blossom a Hart lodged all proper.
Motto: 'CONCORDIA AMICITIA CONJUNCTA' - Concord with friendship

The enarched chief with the blue and silver indentations representing the edge of a saw, in accordance with the ancient practice of heraldry, provides a rebus or word picture of Sawbridgeworth. The indentations also form a kind of dove-tailing, and are allusive to joinery. The two rudders represent the canals and waterways, between them is a wheat sheaf, which refers to farming.

The hart, like that in the County Council's arms, represents Hertfordshire and in order to remove confusion with other similar crests, is placed between two oast houses in allusion to the local malting industry. The garlands of apple blossom typify the fruit industry in the locality.

Literature : Image and information from here.