From Heraldry of the World
Your site history : Schönebeck (Elbe)
Jump to navigation Jump to search 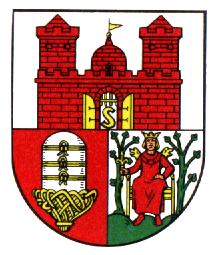 The arms were officially granted on August 2, 1932.

The upper half shows the historical arms of the city, a city gate with the letter S, see image below. The lower half of the arms shows the former arms of Bad Salzelmen (Gross-Salze) and Frohse. The basket with salt in the old Salzelmen arms symbolises the riches brought to the area through the salt mining. In Frohse existed in medieval times a small Royal court, which is symbolised in the arms.

The old arms as shown below showed a city gate with the letter S. This composition already appeared in the 17th century seals of the town, but colours were not described until the image made by Hupp shown below.