From Heraldry of the World
Your site history : Schaafheim
Jump to navigation Jump to search 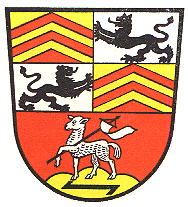 The arms are known since the late 16th century, and the colours are known since the 17th century.
The upper part of the arms shows the arms of the Counts of Hanau-Lichtenberg, who ruled the area for many centuries. The lower part shows a Paschal Lamb (Agnus Dei), a canting symbol (Schaf = sheep), standing on a wolf-iron. The latter is most likely the old village symbol.

As the original arms on the seal showed a complicated composition, a simplified version of the arms was proposed in 1956, see below.