From Heraldry of the World
Your site history : Schlesien
Jump to navigation Jump to search

Former province of the Kingdom of Prussia, at present in South-West Poland. Later known as Niederschlesien, as in 1919 the Regierungsbezirk Oppeln became the province Oberschlesien. 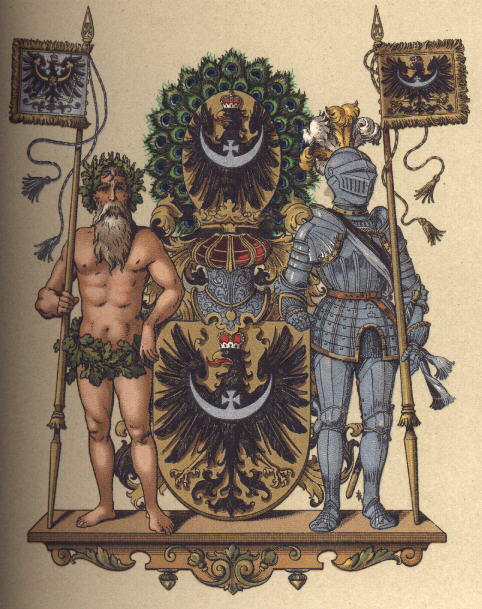 Historically the area was a separate Duchy, with two territories, Ober- and Niederschlesien. Later the area was further divided in a series of smaller principalities, dioceses and counties. The Duchy as such belonged to Poland and later to Brandenburg and Preussen. In the late 18th century the area was divided into a German/Prussian and an Austrian part.

In 1918 part of the area was returned to Poland and a small part to Czechoslovakia. After 1945 the whole German part became again part of Poland. The Austrian part was already divided between Poland, Germany and Czechoslovakia in 1918.

The golden eagle was first used by Duke Boleslaw (died 1201) and has been used as the arms for the area since, even though the Duchy itself did no longer exist. The meaning of the arms is not clear. See here for the arms of the Duchy. In 1880 the eagle was chosen as the arms for the province. Supporters, crown and helmet could be used at wish, as with all Prussian provinces.

After 1919 the arms were used by the province Niederschlesien, but without the crown and supporters as Germany no longer was an Empire, see image below.

The arms are now used by the Polish Province Dolny Śląsk, the Czech region of Slezko (which was a separate region in Czechoslovakia from 1918-1928), and form part of the Czech National Arms.