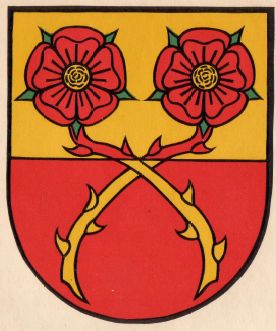 The arms are based on an image of the "people of Schwenden us Glaruss" in a roll of arms from 1532. The text also states that the family originated from Zürich and later research has shown that it is the arms of the Schwend family of Zürich and has nothing to do with the village. The village nevertheless adopte dthe arms, but in different colours to create new arms.