From Heraldry of the World
Your site history : Schwandorf (kreis)
Jump to navigation Jump to search 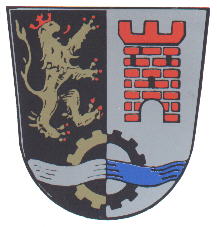 The arms show in the right half lion of the Pfalz, as the larger part of the district historically belonged to the Pfalz. The tower symbolises the many former castles and fortresses in the district. The lower part of the arms symbolise the many rivers and water mills in the area. These played a major role in the industrial development of the area.