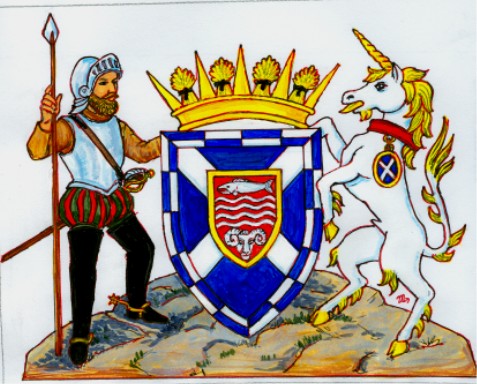 Azure, a saltire Argent, surmounted at the fess point by an inescutcheon Gules, fimbriated Or, charged with four barrulets wavy Argent between in chief a salmon naiant and in base a ram's head cabossed Proper, a bordure counter-compony of the First and Second.

Above the Shield is placed a Coronet appropriate to a statutory Area Council, videlicet:- issuant from a circlet eight paling piles (three and two halves visible) Or and eight garbs (four visible) of the Last, banded Sable; and on a Compartment below the Shield are set for Supporters, dexter, a Border knight Proper, wearing thigh boots Sable, spurred Or, a breast-plate and helmet Proper, girt with a sword, his dexter arm flexed at the elbow, the hand grasping a spear paleways also Proper, and sinister, a unicorn Argent, armed, maned and unguled Or and gorged with a collar Gules, from which is pendant an oval badge Azure, fimbriated Or, charged with a saltire Argent.

The arms are those of the Borders Regional Council with a different crown.