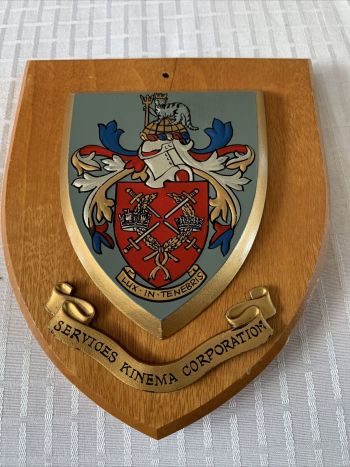 Arms : Gules, four swords saltirewise, points inwards, argent, hilts and pomels and the blades interlaced with a wreath of oakleaves Or enfiling on the dexter side a naval crown and on the sinister side an astral crown argent.
Crest: On a wreath Or, gules and azure, On a demi terrestrial globe Or, a cat-a-mountain statant guardant proper ducally crowned and supporting with the dexter forepaw a trident erect Or. Mantled gules and azure, doubled Or and argent.
Motto: Lux in tenebris.

The arms were officially granted on September 30, 1969.