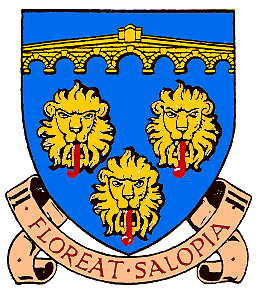 Arms : Azure three Lions' Faces and in chief throughout a representation of the Bridge over the River Severn at Atcham Or.
Crest : In front of two Crosiers in saltire Or a Keystone Azure charged with a Lion's Face Or.
Motto: 'FLOREAT SALOPIA' - May Shrewsbury prosper

The arms were officially granted on November 27, 1975.

The arms are a combination of the lion heads of the old Shrewsbury coat of arms and the badge of Atcham (bridge).

Literature : Information provided by the Shrewsbury and Atcham Council.