SHRIEVALTY ASSOCIATION (The High Sheriffs' Association of England and Wales) 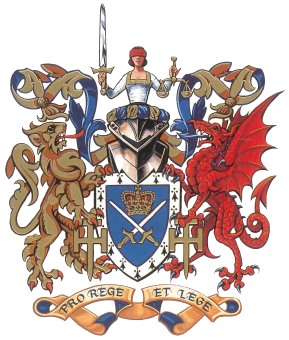 Arms : Arms: Azure two swords in saltire Argent hilts pommels and quillions Or that in bend couped at the point in chief the Royal Crown proper all within a Bordure Ermine.
Crest: Upon a Helm with a Wreath Or and Azure a demi-female figure affronty proper vested Argent garnished Or her Eyes obscured by a blindfold Gules holding aloft in her dexter Hand a Sword Argent hilt pommel and quillons also Or and in her Sinister Hand a Pair of Scales Gold. Mantled: Azure doubled Or.
Supporters: On the dexter side a Lion rampant Or armed and langued Azure resting the exterior paw on a Cross Potent fitchy Or and on the sinister side a Dragon rampant Gules armed and langued Azure resting his exterior claw on a Cross Potent also fitchy Gold.
Motto: Pro Rege et Lege

The arms were officially granted on September 18, 1992.

The arms are based on the badge of the Association, that is the swords of Mercy (curtana, with the point cut off) and Justice, both of which are carried at the Coronation of a Sovereign, crossed in saltire but above them is now the Royal Crown, and there is an ermine border to symbolise the judiciary.

The crest is the well known symbol of Justice, a blindfolded lady, holding the sword and scales of justice.

The supporters refer to England (the lion) and Wales (the dragon). Each supports a cross potent fitchy. The cross is taken from the attributed arms of King Edgar, in whose reign the Office of Sheriff is held by some to have been instituted. The 'crutched cross' itself symbolises the sword of justice and the noble aspirations of the early crusaders who helped the sick and poor and fought for Christ.