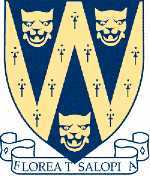 Arms : Erminois, three pile azure, two issuant from the chief and one in base, each charged with a leopard's face Or.
Motto: 'Floreat Salopia'

The arms were officially granted on June 18, 1896 and continnued by the new authority in 2009.

The heads are often referred to as "the loggerheads". This originates presumably in the practice of carving some such motif on the head of the log used as a battering ram.

Floreat Salopia, the county's motto, means "May Shropshire flourish!" - Salop. is the standard abbreviation for Shropshire.