From Heraldry of the World
Your site history : Sigmaringen (kreis)
Jump to navigation Jump to search

State : Baden-Württemberg
Additions : 1973 Saulgau (partly) and some municipalities from other districts 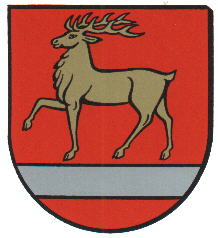 The arms combine the deer taken from the previous arms, with the bar of Austria, as a large part of the former Saulgau district historically belonged to Austria. 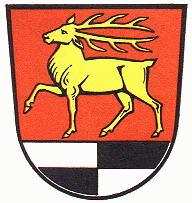 The deer is derived from the arms of the County and city of Sigmaringen, known since 1300. The largest part of the district historically belonged to this county. The base of the arms shows the arms of the Hohenzollern family and symbollise the influence of this family in the area, as well as the incorporation of the larger part of the district into the Principality of Hohenzollern from 1803 until 1850.